A common topic of conversation among rules officials and players alike lately revolves around where a player can stand during his AimPoint read so that he does not touch his intended line. Rule 16-1 prohibits a player from intentionally walking in the line of the putt nor improving it by touching it.

Recently the USGA and R&A released a joint statement on the issue and clearly state that collecting information about the putt, including feeling slope for the AimPoint read, is legal as long as the player stays a reasonable distance away from their intended line. The European Tour also released a video explaining their position on it. The only ambiguity lies in what the definition is of the term “reasonable distance”. That is left to the local rules officials and can depend on the player’s level of expertise and the length and amount of break of the putt.

To me the real question lies in the player’s ability to accurately estimate what the intended line of the putt is, and that is where we can employ some physics to clarify where we can stand when reading our putt.

The fail-safe answer is we can always walk to the low side of the line of play and not be in breach of the rules. The Line of Play is defined as a straight line from the ball to the hole, which would be lower than the intended path of the putt if the putt had any break at all. 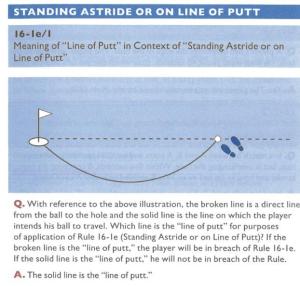 However on more advanced and accurate reads we may want to either straddle the path (on very straight or short putts) or feel the slope higher and closer towards the actual path on putts with big breaks. In these situations we need to have an understanding of where the ball could be rolling if we want to safely stay off our line. 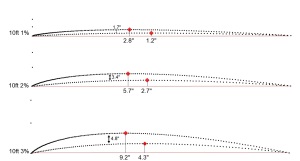 What do these images show us? On a 10 foot putt the distance between the highest and lowest reasonable line is between 1.7 inches (across a 1% slope) and 4.8 inches (across a 3% slope). On a 20 foot putt those numbers increase to 2.4 inches and 7.9 inches.  So if you are going to straddle your line, your feet need to be at least 18 inches apart on bigger breaking putts, but shoulder width at about 24 inches would be very safe. And as we start seeing bigger breaks, the lowest reasonable line has also shifted almost a foot above the Line of Play. Also notice that the apex of the putt (red dot) shifts towards to ball as the putt speed increases.

It’s important that you are familiar with these geometries so that you don’t breach Rule 16-1 but also so that you can defend your read to someone who is not familiar with it.  I have seen instances where a player had a putt breaking almost 10 feet so, they shifted where they were feeling slope above the Line of Play and were challenged on it. I don’t know of anyone who intentionally would stand in their own line, but be mindful or where the path should be just to be safe.